On January 18 2020, Dr. Glory Van Scott received the prestigious IABD Scholar Award in Philadelphia, PA. This video (by Suggs Media), showcasing some of the many highlights of Dr. Glory’s exceptional career and her deep connections to the worlds of Black Dance, Theater and the Arts, was shown prior to the award presentation.

We interviewed Dr. Glory Van Scott about her Encampment experience and why the EFC is important today. You can hear her in person by joining her conversation with Dr. Anne Klaeysen at the New York Society for Ethical Culture, May 16, 7:00-8:30 p.m. Tickets available at https://bit.ly/307ImOZ. The event is a celebration of her memoir Glory: A Life Among Legends. Dr. Glory is donating partial proceeds to support participation of New York-area youth in the 2019 Encampment.

What did you learn at the Encampment? I learned that, if you are politically active, you can make a change. The teachers would step aside and let the Encampers take a position and defend it. It was a catalyst for me to do what I have done with my life. When you finished the Encampment, you looked at the world in a different way. You knew you would use what you learned and go on and build something from what they gave you — use it and use it well.

What is your favorite memory or story from the Encampment? We visited with Eleanor Roosevelt at Hyde Park. We sat on the ground and she talked to us. I was taking notes and I asked her, “How do we change so prejudice will not exist?” She replied that it was up to each one of us to make this change by starting in our own backyards. This, of course, was exactly what we were learning at the Encampment. 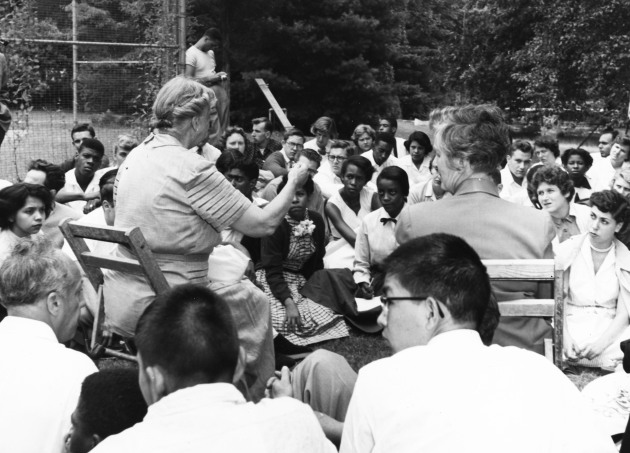 What motivated you to go to the Encampment? I came from a family where we all read and we discussed politics and voting. I was aware of inequity from a young age and wanted to do something to help. When I was older, I was a student at the Abraham Lincoln Cultural Arts Center in Chicago. I loved my teachers and classes there. It was run by Quakers and we had wonderful teachers from different countries. Our teachers asked us to think about situations such as the Japanese internment camps, and taught us that we had a responsibility to care for others. An older dancer who I admired went to the Encampment and came back talking about what a great experience it was. I was ready — I knew I wanted to go!

When you arrived, what was your first impression of the Encampment? It was unreal at Fieldston! There were kids from the South, the North, all over; every culture and ethnicity. My best friend, David Rothenberg, was from New Jersey. There were so many people from everywhere — it was the ultimate gumbo!

How has the EFC influenced your life? There were so many experiences that together made a change in us. Al Black was a powerful speaker. Ies Spetter had been in Holland during the war, so he brought that perspective. There was Eleanor Roosevelt. Our discussion group was led by Warren Ramaley, who was a wonderful teacher. David and I were both talkers and it was so lively … we were swinging! It was so magnificent, what we were learning. We learned about the economy. We met lawyers. We visited the Garment District and met with the ILGWU. We went downtown to offices to see how people were working. It was such a great combination of teaching, experiences, talking and lecturing that we didn’t want to go to sleep at night — or go home at the end!

Every teacher took the time to talk with you and made themselves available to you. You knew they had your back. Frances Levenson (who was a founding member of the National Committee Against Discrimination in Housing) and Bernard Warshavsky were especially supportive to me when I decided to stay in New York after the Encampment, helping me to find work and lodging. From there, things moved very quickly. I worked as a secretary and went to auditions. Then I auditioned for George Balanchine and became a member of the cast of “House of Flowers,” and my career took off.

As I mentioned before, we were expected to use what we learned. When David Rothenberg (who later founded the Fortune Society) asked me to talk with some young boys who were incarcerated in a juvenile home, I was glad to have a chance to give back. I sang and spoke with them about doing things in a better way, encouraging them: “You don’t have to stay in this situation — you can make a change.”

Then Murray Phillips from the EFC asked me to come and do something for other kids through the Police Athletic League (PAL). It was awesome — we sang songs, and I taught acting and dance. That was the start of my working with young people in social groups.

Later, I was offered a lead part in the St. Louis Municipal Opera Theatre. When I read the part, I did not feel it represented my people well. I told my agent that I would not take the part. In addition, I let CORE and the NAACP know about this script and they obtained an injunction until the script was changed. When I was sued by the theater, I told them that my inside feelings about who I am and my people were never going to be bought — that’s the EFC. I took a stand!

The EFC also provided another direction that has guided my life. In 1955, my 14-year-old cousin Emmett Till was murdered in Mississippi by a lynch mob. Having had the EFC experience, I knew that not all white people were monsters because I had been in a situation that was different. No matter what we went through in the ‘60s, having lived with the Encampment, no one has ever been able to move me away from the direction I was a part of and the reality I experienced. I did not receive feelings of hate in my heart. No one could break my spirit because I knew better. I knew what should be done and I knew there were bad people, but they are not all bad.

Why is the EFC important now? EFC is important now because of the state that the world is in now — the world needs a balm. We have to give young people a chance to stop, look and listen. To let them know that what you have in the world before you is up to you. Do not waste your life — you must do something with it. There aren’t enough years for all the things that have to be done, but you can use the time you have. We can restart our engines so we focus on helping others who don’t know the way. If you are breathing and you are not helping others, then you are not really living.